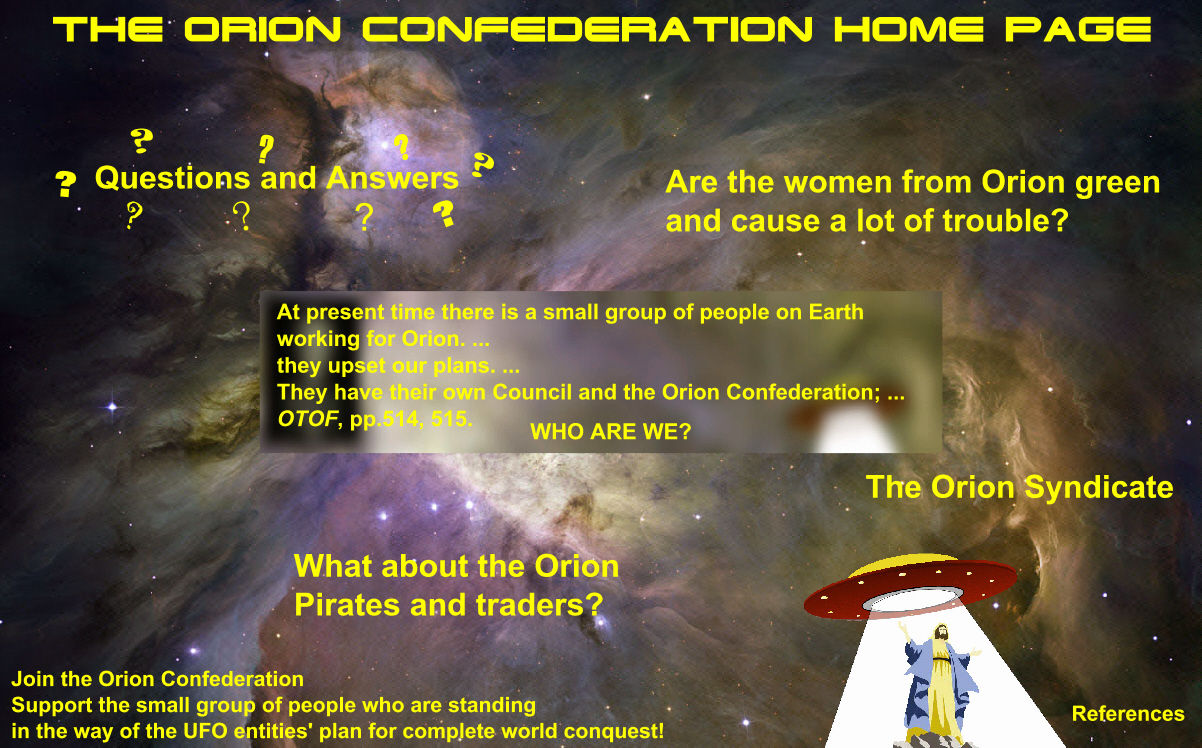 
Is Orion really the home of evil spacemen who are planning to take over the Earth?
Are forces from Epsilon already here in the form of poltergeists?
Are flying saucers interplanetary spacecraft?
Is there any recorded intelligence behind UFO activities?
The UFO entities warn of two things coming soon. What are they?
The main cause of heart attacks according to the UFO entities?
The most profound thought the human race now possesses?
Was John Keel a member of the Orion Confederation?
Is Evolution the biological process throughout the universe?
What about the Paul movie? Why is it anti-religion and pro-Evolution?

Are the women from Orion green and cause a lot of trouble?
No.
This is mythological stuff from the Star Trek TV series and movies.
It has nothing to do with us.

What about the Orion Pirates and traders?
Same answer as for the green women. This is part of the Star Trek TV series mythological universe.
But there is an interesting thought here.
The writers of the TV series have obviously painted the group from Orion in a pretty bad light. No doubt following the lead of the UFO entities who give the Orion Confederation really bad press.
Perhaps they just read something bad and decided this could make for some interesting story lines.
It does, but it is not the truth.
See our Questions and Answers page for more information.

The Orion Syndicate
Same answer as for the green women. And the Orion Pirates and traders.
The Orion Syndicate is part of the Star Trek TV series mythological universe.
It has nothing to do with the real Orion Confederation.

UFO entities' Elder Brother
The Saucers constitute the "Host" which is the forerunner of the promised "Second Coming" of the Elder Brother. George Hunt Williamson, Other Tongues—Other Flesh, p.484.

see our Questions and Answers page for more information.


References
OTOF: George Hunt Williamson, Other Tongues—Other Flesh, 1953, Amherst Press: Amherst, Wisconsin.
This book appears to be available in various formats: pdf, epub and directly on the web. There may be others. And they all appear to have different pagination. The pagination given here is for the epub version and is approximate.

Who was John Keel?

John Alva Keel, born Alva John Kiehle (March 25, 1930 - July 3, 2009) was an American journalist and influential UFOlogist who is best known as author of The Mothman Prophecies.

In 1967, Keel popularized the term "Men In Black" in an article for the men's adventure magazine Saga, entitled "UFO Agents of Terror". According to Keel, he initially sought to explain UFOs as extraterrestrial visitations, but later abandoned this hypothesis. His third book, UFOs: Operation Trojan Horse published in 1970, linked UFOs to supernatural concepts such as monsters, ghosts and demons. Keel used the term "ultraterrestrials" to describe UFO occupants he believed to be non-human entities capable of taking on whatever form they want.

His 1975 book, The Mothman Prophecies was Keel's account of his investigation into alleged sightings in West Virginia of a huge, winged creature called the "Mothman." The book combines Keel's account of receiving strange phone calls with reports of mutilated pets and culminates with the December 15, 1967, collapse of the Silver Bridge across the Ohio River. The book was widely popularized as the basis of a 2002 film of the same name starring Richard Gere.

Prolific and imaginative, Keel was considered a significant influence within the UFO and Fortean genre.
http://en.wikipedia.org/wiki/John_Keel


Note: it is believed that the character Richard Gere plays in this movie, and actually named John, is loosely based on John Keel himself and his experiences in West Virginia. The movie also gives a fascinating insight into the workings and abilities of the ultraterrestrials.


The Mothman Prophecies is a 2002 psychological thriller film directed by Mark Pellington, based on the 1975 book of the same name by parapsychologist and Fortean author John Keel. ... The film stars Richard Gere as John Klein, a reporter who researches the legend of the Mothman.
The film claims to be based on actual events that occurred between November 1966 and December 1967 in Point Pleasant, West Virginia.
http://en.wikipedia.org/wiki/The_Mothman_Prophecies_(film)


Who was George Hunt Williamson?


George Hunt Williamson (December 9, 1926 - January 1986), aka Michael d'Obrenovic and Brother Philip, was one of the "four guys named George" among the mid-1950s contactees. The others were George Adamski, George King, and George Van Tassel. ...

Having read William Dudley Pelley's book Star Guests (1950), Williamson worked for a while for Pelley's cult organization, ...
Pelley had generated huge quantities of communications with "advanced intelligences" via automatic writing, and very clearly was an immediate inspiration to Williamson, who combined his fascination with the occult and with flying saucers by trying to contact flying saucer crews with a home-made Ouija board. ... Williamson and his wife, and fellow saucer believers Alfred and Betty Bailey, became regular visitors to Adamski's commune ...

The Williamsons and Baileys continued their Ouija-board sessions, getting their own personal revelations from the Space Brothers, which led to a drastic falling-out with Adamski.

In 1954, Williamson and Bailey published The Saucers Speak which emphasized supposed short-wave radio communications with friendly saucer pilots, but in fact depended for almost all its contents on the ouija-board sessions Bailey and Williamson held regularly from 1952 onward. ... Williamson also reveals that while most space aliens are helpful and good, there are some very bad ones hanging out near Orion and headed for earth in force, bent on conquest.

Williamson became a more obscure competitor to Adamski, eventually combining his own channelling and the beliefs of a small contactee cult ... to produce a series of books about the secret, ancient history of mankind: Other Tongues—Other Flesh (1957), Secret Places of the Lion (1958), UFOs Confidential with John McCoy (1958), Road in the Sky (1959) and Secret of the Andes (1961). These books, when not rewriting the Old and New Testaments to depict every important person as a reincarnation of one of only six or eight different "entities, ... and, according to Williamson, spacemen had also helped materially in the founding of the Jewish and Christian religions, impersonating "gods" and providing "miracles" when needed. Williamson spiced his books with additional Ouija-revelations to the effect that some South, Central and North American ancient civilizations actually began as colonies of human-appearing extraterrestrials. Williamson can be considered a more mystically-inclined forerunner of Erich von Däniken; Secret Places of the Lion also displays the clear and explicit influence of Immanuel Velikovsky.
http://en.wikipedia.org/wiki/George_Hunt_Williamson


Considering that John Keel has described these UFO entities as a bunch of evil liars and put-on artists it would do well for the general public to reject these suppositions especially the part about the group from Orion being very bad.

Further reflections on all of this:
Just about all of George Williamson's UFO communications appear to have come by ouija-board. The ouija-board is a tool that is well known to be used by mediums to communicate with the spirit world during a seance. It would appear that the UFO entities who were communicating with George Williamson were in reality just the plain old lying spirits that have been troubling the human race since the beginning of time. These supposed UFO entities are not space aliens visiting this planet in space craft as they would have us believe. In fact they are just the old lying spirits that are mentioned in the Bible and who spoke through people, just like in a seance. The Bible refers to these evil lying entities as spirits or demons or devils or fallen angels. Take your pick. And just like John Keel's "ultraterrestrials", they are non-human entities capable of taking on whatever form they want.